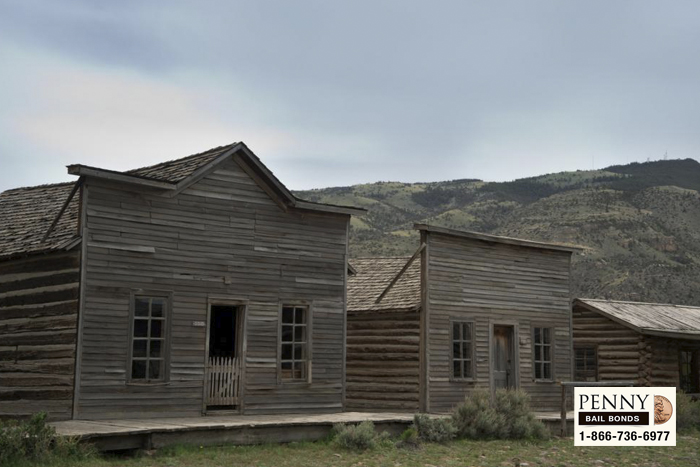 In northern California along the Nevada border, by Yosemite National Park, is an old abandoned mining town known as Bodie. It is now a State Historic Park. The town was built around the Bunker Hill Mine 1861. The town was named after the miner William S. Bodey who discovered gold in the area in 1859, but unfortunately died the winter after his discovery.

For a long while, Bodie was a seedy mining town filled with all kinds of illicit businesses. The town faced many hardships, including harsh winters and numerous fires. Despite all of that, the town did have a population of nearly 10,000 around 1879. Eventually, the gold mine stopped producing ore, and the citizens began to leave the area.

In 1932, a young boy, only 2 ½, accidently started a fire while play with matches that proceeded to burn down 95% of the town. Soon after, only six people were left residing in Bodie.

Here is where things begin to get interesting. One of the men still living in the town shot and killed his wife. Three of the remaining men in the town then proceeded to kill the murder. After that, those three men would be continually visited by the ghost of the murder until they all died due to strange illnesses.

Bodie is a ghost town in two ways. First, it was a town that was completely abandoned by the 1940’s. Second, it is a town haunted by the spirits of its old residents.

Legend says that if anyone takes something from the town, they will be cursed with bad luck until the item is returned. The ghosts of this place like their stuff, and will curse anyone who tries to take it from them. Many people have tried taking things from the town, and they have all returned the items due to the bad luck they endured.

Park rangers have dozens of stories of the different ghosts that haunt the buildings. Some are kind, while others are more vengeful. Some are the spirits of residents who faced untimely deaths, and so they refuse to leave their homes. Others are the spirits of children, taken too soon from this world. While all of the ghosts may have their own unique stories, they all call Bodie home.

Every time summer rolls around, you begin to see articles all over about the dangers of leaving pets and children ...
Read More
A Brief History of Dia de los Muertos